George Wachiuri is an entrepreneur par excellence. He captains one of the most trailblazing organizations in the region, Optiven Group, which was recently singled out as one of the companies that will inspire Africa in 2019, by the London Stock Exchange.

Under his stewardship, Optiven Group has continued to grow from one level to the next. It currently has a number of successful subsidiaries that include Optiven Limited, which deals in Real Estate and Optiven Construction, which produces concrete products.

Inspired by a drive to economically and socially transform the society, Optiven Group aims at creating over 30, 000 direct employees by the year 2030. George has indefatigably been at the fore-front of empowering Kenyans and Africans in Diaspora, especially to invest in the real estate sector.

George Wachiuri started over 15 different businesses which ended up folding, he has continued to prudently steward the Group of Companies that have so far received numerous accolades both locally and internationally. This includes scooping the best employer in East Africa 2019 by East Africa Best Employer Brand Awards. Optiven was also the overall winner in Top 100 Mid-Sized Companies Survey, 2014/2015 by KPMG and Nation Media Group. The firm also scooped the Best Company in Customer Orientation & Marketing in Kenya (COYA AWARDS) – 2015.

George Wachiuri has won several awards across the globe, including the African Business Personality Award, 2018 by the Voice Achievers Award, Netherlands, Best Entrepreneur in Africa, 2017 – Diaspora Entertainment Awards and Recognition (D.E.A.R) awards 2017, Best and Most Innovative Entrepreneur, Business and Entrepreneurship, Mashujaa Awards 2015 (USA), amongst others.

This pace-setting innovator and entrepreneur holds a Masters of Business Administration from the University of Nairobi and a Bachelor of Commerce (Marketing Option) and is a Certified Public Accountant CPA (K).  He is also a passionate philanthropist and the Chairman and Trustee of one of the most vibrant Foundations in the region, Optiven Foundation. He is also a motivational speaker, a lecturer and serves as a church elder.

To top it up, George  Wachiuri is also a family man and a celebrated author of bestselling books; ‘Soaring like an Eagle’ and ‘Unleash your full Potential’.

The many challenges that stood in the way of George Wachiuri’s earlier start-ups did not dampen his hopes of becoming a successful businessman. Today Mr Wachiuri, the CEO of Optiven Limited Investments, can look back at the hurdles which dogged him for more than 15 years with a smile. This is because the real estate developer has earned prestigious accolades over time.

They include the company’s surprise ranking as the overall winner in the Top 100 mid-sized companies 2014/15 edition. Optiven was also the best real estate company in the mid-sized category. Mr George Wachiuri’s journey to the top was strewn with hurdles. He described the path through his previous 15 enterprises as depressing, stressing but also rewarding. He recalls a time when he sold his property to refund a client’s money after making a Sh5 million loss in a deal gone sour.

“After the loss I swore that I would never do business again, but I remembered that winners never quit and quitters never win,” he said. Mr George Wachiuri founded Optiven as a general supplies entity which diversified operations into the real estate sector in 2008.

“My previous businesses failed but they acted as a lesson to do better, my appetite for taking risks grew as a result of many failed ventures that I started.” Among his failed enterprises were joint ventures, partnerships and sole proprietorships.

“I learnt from the initiatives that no one should ever give up. I learnt to focus on my vision, trust in God, be self-disciplined, network relentlessly, be passionate about my undertakings, work smart and hire people who are smarter than me,” he said.

Having wizened up through lessons in failure, Mr George Wachiuri set up Optiven using a paltry Sh80,000 as seed capital and an additional Sh300,000 borrowed from a bank. “Despite the dramatic start which forced us to rely on debt financing, the company has grown and employs more than 50 today. Our projects have gradually raised the company’s asset value to more than Sh1 billion,” Mr Wachiuri said.

He attributed the firm’s growth to a culture of honesty, professionalism, creativity and innovation.”At Optiven we do not promise what we cannot deliver. The secret of our growth is keeping our word and integrity. We aspire to keep our focus on making our customers wealthy,” he said.

The MBA graduate of the University of Nairobi said they have set a 200 per cent growth target for 2015/16, adding that the business environment has improved with many Kenyans joining the middle class. “We have seen more lenders willing to offer us credit facilities. We also have seen our main lender reduce interest on loans and our customers have increased, too” he said.

Winning the Top 100 competition has also placed the company on a pedestal, making it a pace-setter in the real estate industry, he said. He has set up a YouTube site, Optiven Kenya, to advise people on investment. The company interacts with clients through investment forums, radio programmes, videos on mentoring and investments and one-on-one talks. Mr George Wachiuri plans to decentralise the firm the counties.

“We are targeting 20 counties before the end of 2016. This is part of our five-year strategic plan.” The main challenge in the business, he said, is getting “clean property”. “One can spend six to eight months before getting clean property. I lost over Sh5 million on a bad deal which was all my 10-year savings in employment. That loss drives my passion. No single Kenyan will ever loss money if they deal with us,” he said.

He advises property developers to build more homes to meet the country’s rising demand for them. “We need more affordable homes as real estate companies are currently providing only 42,000 per year.” Optiven sells value-added plots with emphasis on conserving the environment, which includes planting trees. The firm also emphasises on providing security, piped clean water and infrastructure among other facilities.

“There are places where the focus has been on making life easy for dwellers by providing commercial centres, provision of children’s playing fields, setting up green zones and resting parks,” he said. Clients can pay for property in instalments of up to three years.

Mr George Wachiuri, who described himself as an early riser, often takes a break from his busy schedule to go swimming with his children. He also creates time to read and write books. His works include Soaring Like an Eagle, a book whose proceeds go to charity, and Unleash Your Full Potential.

“I also take my wife for coffee once a week. We travel a lot to the village to see our dairy farm and I run mentoring forums,” he said. Optiven runs a foundation which pays fees for needy children, plants trees to conserve the environment, runs medical camps and builds houses for elderly people as part of its social responsibility contract. 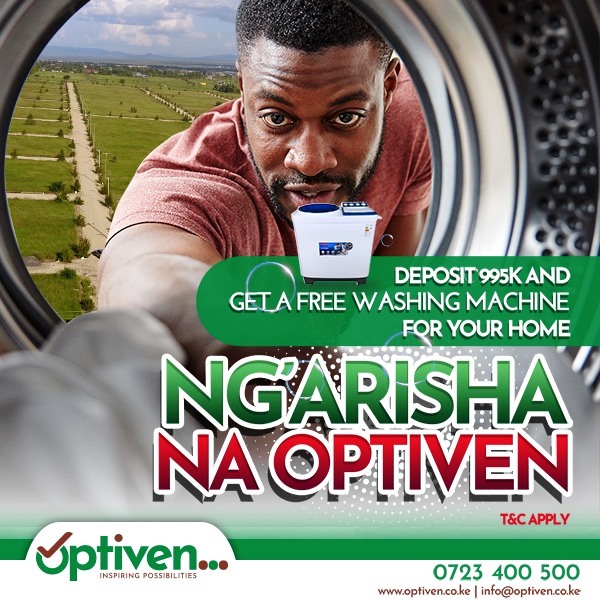